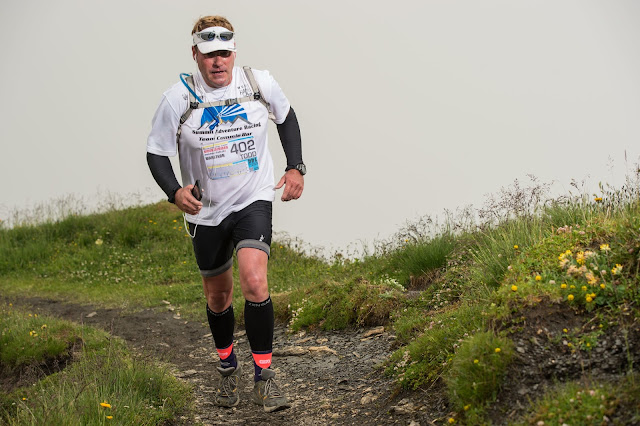 I discovered this race because someone gave me a coffee table book that was all about the great races in the world that required human endurance to the maximum.
When I put together my training plan for 2016 there were three objectives:
1.  Do an ultra run
2.  Do one of these races in the book
3.  Compete in an expedition multi day adventure race at the World Series level.

MountainMan fit nicely in the schedule and allowed me to knock off the first 2 objectives.
It also allowed me to get in a nice LONG trek/run in the train up to the Raid in France….

So here’s how it unrolled.  On the Thursday before I flew from Oslo to Lyon and made my way to Chamonix to spend the night in the mountains.  I had a hotel reservation at the race start that began on Friday so I began wandering over to StockAlp Switzerland Friday morning.  The race start and small ski village is basically not accessible by vehicle so the plan was to take the gondola up when I got there and get to race registration before it closed and then to the hotel.

Then the shit hit the fan….  I got to the Gondola station at 1800hrs and learned the last lift up was at 1730…..  so what the fuck do I do?  The guy told me they allow vehicles to pass up the service road on the hour and then the next hour they allow vehicles back down!!

So I got in line with about 30 other vehicles and waited for it to hit 1900 and we could go up….  Damn I wish I had made the gondola!  The road was a one lane cow path that wound it’s way up and up and up and up and up…..  hairpin after hairpin….  Then it started raining cats and dogs….  Holy shit I got the heebee jeebees driving up there.  It took about 20 minutes and covered about 6 miles I think.

Once up I stopped to ask someone where my hotel was.  I got a terrified look and they replied that I should have received an email stating the owners had shut down the hotel basically overnight and that I was shit out of luck.

Well, there was one thing for sure.  I was NOT DRIVING BACK DOWN THAT ROAD IN THE DARK AND RAIN…..  I made plans to sleep in the car but then the kind lady made a call and it appears there was a room in a hotel (dormitory style) and I said YES!!

Add this on top of the fact that I had been dealing with a huge calf/Achilles tendon problem for about two weeks that had me even contemplating taking the start line and I was a mess.  I went to the hotel restaurant and had a schnitzel and 3 weiss beers.  Fuck it……

The next morning dawned bright but the clouds and fog were expected.  I did a big stretching session and applied heat to my calf and prayed…

There were only about 40 people or so doing this.  The race started almost funny with the guy basically counting down in German from 10 to 0 and “Schnell”!!

I’m not going to go into all the details kilometer by kilometer but basically there were two different loops.  After about 25k or so you circled back by the start area and started a different loop.

The scenery was amazing.  Early on in the race the sun was out and you basically could see thousands of feet down into these valleys.  The fog really rolled in and quite frankly it was a bit scary only seeing about 20 feet in front of you knowing there were cliffs on either side that meant death. 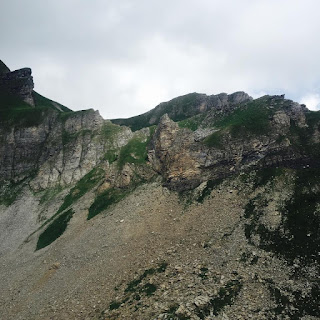 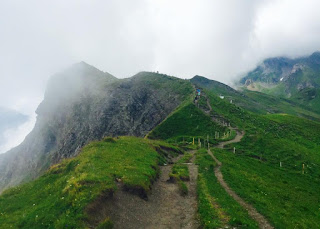 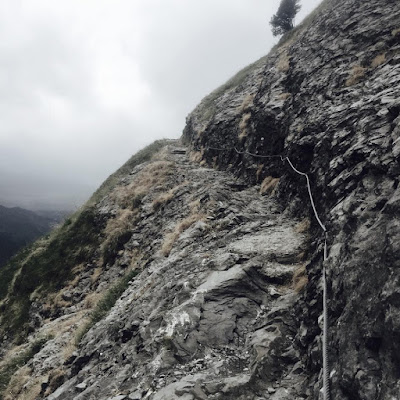 I ran most of the race by myself.  Other than the start and until people spread out (you could see people on the ridgelines ahead) I got with a group on the big descent on Loop 1 and we all got lost in the fog.  Soon we figured it out and I didn’t want to do that again so I quit following people and made sure I verified the turns and trails.  The dew point with the fog was so high water was literally dripping off me and my visor was soaked.  With every step another pint of water would roll off the brim of the hat. 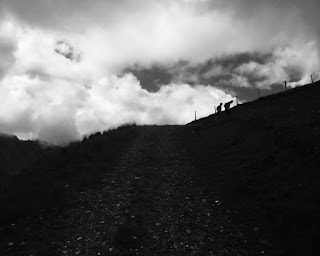 Another thing that was cool was the constant (and I mean constant) sound of cowbells jingling and jangling.  The cows grazed in these summer pastures and they would look at you like you were a fool running by.  In the fog you couldn't see them but knew they were out there.  spooky! 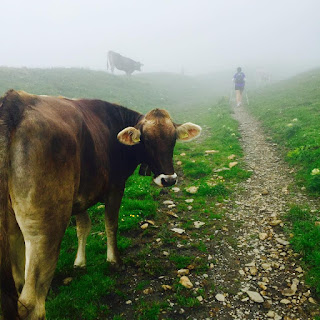 The course was marked pretty well.  Of course this is Switzerland and everything is orderly.  Every trail in the world is marked out there with beautiful sign posts and we also just kept following the red and white painting on the rocks. 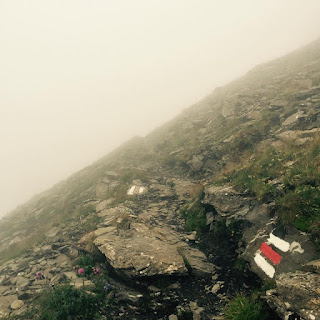 On the second loop out of the aid station I ran a bit with a girl from Switzerland.  I soon left her behind and then in the fog ran into another girl that was a bit lost.  We then stayed together until the big, big climb up to Joch pass when I started to fade a bit and she pulled ahead.

During the course there were small little aid stations staffed by families that lived in these mountains.  The offerings were modest (generally some bananas and some sausage and beer and water)  I ate sausage and drank beer mostly!  They would try out their English on me and we had fun. 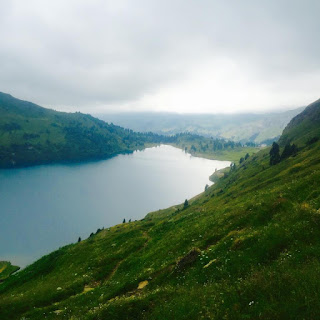 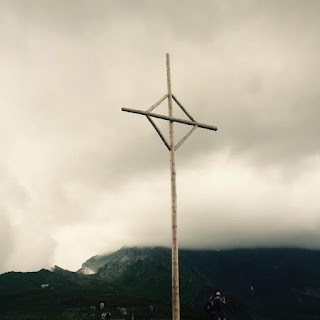 The big climb on Loop 2 to Joch pass did take it out of me.  The long descent I was still able to run on the single track but when it hit the road I alternated between running and walking.  At the finish they gave you a sticker and a mug of beer………..  I am a MountainMan!!!!