What a great day in Ohiopyle.... After a very chilly start to the morning (32 degrees just prior to race start) the sun came out and it was a great day all around. The Segments of the race (although not technically difficult) were fun and challenging. The movement from the paddle take out to CP 5 and then over to CP 6 was very, very tough. 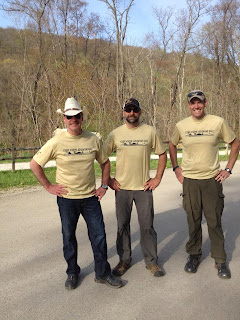 I got over to Opyle about 6:30 on Friday and met up with Bait and Andy. We checked into the race HQ and got the maps. It took us a while to figure out that they had the Grid posting on another map in another area and we had to go over and transpose them on our map. After that we went to Falls City Pub for a couple beers and a burrito. I like racing with gas.

Bait and I then went up to the campground and got all the gear packed. Andy went home. We packed up hear and bullshitted till about 10pm or so then we hit the sack. I had trouble sleeping mainly because of my knee hurting and thinking about my knee hurting during the race. I hate that. I was hoping that my knee issue would not be a factor in the race but I was pretty sure it would be. I finally got up and put on the steel brace to stabilize the knee cause every time I rolled over in the sleeping bag it ached.

I woke up about 0500 and went over to the shower room. Took a hot, hot shower (it was very cold out), fretted about my knee (although it felt better) and generally got ready for the race:

Let's see:
1. Lube up with vaseline all over to prevent chafing
2. Bandaids on the nipples
3. Contact lenses in 4. Knee taped up crazy with K Tape
5. Some sunscreen on
6. More lube, just in case.....

Bait and I headed down about 0630 and met Andy over in the parking lot. Big decision now. What to wear to start the race, what to pack and what not to pack. I decided on a pretty normal set up with a long sleeve shirt covered by our team shirt. I did pack a pair of columbia rain paints and a rain jacket for the paddle. If it was going to be below 40 degrees on the Middle Yough for 2+ hours it would not be fun. So we went and check in and got ready.

At 0800 the race started.
Here' the summary
1. 1 mile run prologue
2. Mountain bike to the top of the mountain on Sugar Loaf
3. Run/Trek down the valley to the paddle put in
4. 2 hour paddle on the Middle Yough
5. Trek down the GAP and CLIMB, CLIMB, CLIMB, BUSHWACK, BUSHWACK, BUSHWACK up to CP5 and then over 1600 feet of elevation gain in 700 meters up to the trail to CP 6.
6. Bike section to finish with 4 CPs

The Prologue was uneventful and we probably should have just done it in our bike shoes cause we spent a time when we got back in changing back out of running shoes and packing them on our bikes/packs. Basically we were last out of transition!

We made a tactical decision early on in getting to the top of the mountain. I chose to go up the Sugar Loaf trail which I had never been up. My only comparison was the alternative Baughman trail which I knew was very technical and very steep. I think we made a great decision and we cruised into CP 1. I'd love to know the breakdown from guys that have raced here before about their thoughts on this.

From there we skirted the Sugarloaf and pushed up and over the ski/sledding hill to cruise down and to the transition area and CP 2. Knee condition:

So far so good. From there we dropped bikes and started trekking down the Firetowner road. We kept up a steady jog for 5 miles or so and into the paddle put in.

We decided that Bait and I would be in one kayak and Andy in the other. We started off with a tow line on the rear kayak but Andy said he could keep up and he did!. It's always fun to do the Middle Yough and we made it through the Class 2-3 water and into the take out in just under 2 hours. We took a break to change out of the wet clothes before starting down the GAP. 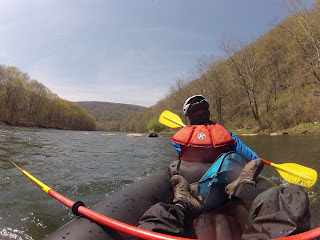 This would be the hardest section of the race.
There were two parts to this. One was getting to CP 5 and the other (probably more important) was getting out of CP 5 without transversing the entire ridge line. We jogged down the Great Allegany Passage for about 3 miles or so. We evaluated several drainages for access to the top but thought they might be too difficult and too much bushwacking. Ultimately we kept going and opted for a bit of a flatter start up the mountain but knowing it would be longer. Nothing eventful and our navigation was right but it was a hand over foot slog up this thing till we hit the gas well road. We then skirted the road down to CP 5. No problem.


Then we looked up. 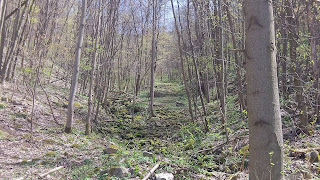 There was no way out of here except to basically go straight up for close to 1 kilometer. We looked at the contour lines on the map and basically cried. It would gain over 1600 fee over that kilometer. After a very intense climb we hit the road. Knee condition: fading...

We didn't have enough in us to do much running after that and we walked down then back up to the bike transition area. From there we busted down and nailed the CPs all the time looking at the hours remaining. We knew it was getting tight and we headed back to the finish to clock in at 9Hours and 20 minutes. At the awards ceremony we found we had won the 3 man elite category which was great for a newly formed team and even better to get the qualifier for the National Championships. 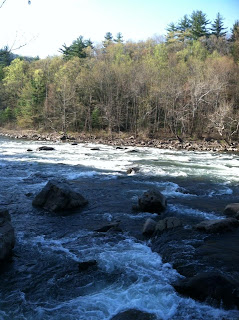 What an amazing schedule for this summer.  We are truly blessed to be able to live in the places we do and do the things we love......

2-4 May:  Missoula, MT - Annual high altitude training in the Rockies with the board meeting of the Adventure Cycling Association.

After that we'll cool off at the Stand Up Paddling Races and drink some cold ones...

Posted by TCOPES World at 20:38 No comments:

Posted by TCOPES World at 18:32 No comments:

Posted by TCOPES World at 18:28 No comments: