In Adventure Racing there is a fine line between winning, finishing and utter disintegration……

Last year I had joined up with Carpe Vitam to run this race with Stephen Eland and Kurt _________  We took second place in 3 man elite and this year we had high hopes to win this thing (at least I did!!).  It was decided that Ross Apparies would join me and Stephen to round out the team for the 2012 Edition of  The Longest Day 2012

We had initial conversations starting about two weeks ago about gear and possibilities.  Remember we didn’t even know where the race was taking place until the weekend before!

I drove over from Boston on Friday night to meet the guys and do some initial planning.  I didn’t get in till around 10pm so I just went straight to the hotel and crashed.
Saturday morning I got up and had a coffee and meandered over to race headquarters.  Stephan was there and we started laying out gear.

So here’s the race report with the pack list and details below.

How the race unfolded

Segment 1:  Run Prologue – The navigator on the team had to run a loop of about one mile while the other team members ran the same loop in the reverse direction.  When they met they had to exchange something and then continue the run back to the start to get the packs

Segment 2:  On Foot/Trekking/Running –
This segment had two mandatory check points and 5 optionals.  We planned a route that took us up the mountain and knocked off optionals 1 and 2 and then into Mandatory point 1.  When we got to MP 1 we were doing well and decided to get Optionals 3-4 and then MP 2.  We did that.  Then at 4 hours into a 24 hr race we made a strategic error that cost us the race eventually.  We decided to go after Optional Point 5.  It was tempting because of the scoring.  If we got OP5 then we had cleared ALL points on this segment and got a huge point bonus.  Well we did it but ultimately it took us 9 hours to clear this segment and get to the first transition area.  It would be time we could not make up.  Overall we were racing very good and nailing the navigation.  But we were also sloppy.  During this segment somehow my bike helmet came off my pack and was lost.  Ross had lost his knife as well.  In some ways a very good start and in other ways a bad start.

Segment 3:  Mountain Biking
We arrived in Transition Area 1 around 6:30pm and someone had found my helmet!!  We adjusted gear and saddled up the bikes at approximately 7pm.  We would not get off the bikes till 4:30 in the morning….  All night riders!
Because we were very much behind on the course (but leading the race because we had the most points) we knew we could only hit the Mandatories.  I forget how many there were on the bike section but we were doing pretty good on the first then got lost basically in the middle of a small town looking for a rail trail to find the second.  It cost more time.  After that we had a long hike a bike up the mountain to nail a couple more checkpoints.  Ross was not feeling good at this time and couldn’t keep food down.  Ever hear a guy puking on his bike behind you coming down a trail in the middle of the night?  Ha!  On the 3rd CP we ran into a guy who was doing the course solo.  That is a lonely experience.  We invited him to join up with us and accompany us on the rest of the bike portion.

Somewhere in the night I also made a stupid mistake.  I know when I’m getting tired to not try and ride too technical.  At night it’s hard to see, the body is tired, and judgement is impaired.  Well, I forged ahead anyway and tried to hop a log spanning the trail and wiped out miserably.  My leg was spread across the log when the bike flipped back over on top of me and landed right on my thigh.  It hurt like *&^(%*&……  Nothing was broken but now I had additional nagging thoughts about how it would feel in another 6 hours…..

There was a mandatory cut off time of 11:45pm at Check point 11.  Now we knew we could not make that time because of the vast amount of time we spent on Segment 1 on foot.  We got the mandatory point near a reservoir and filtered more water (we were dry) and then limped into Check point 11 basically 3 hours behind cut off time.  At that point our team was “short coursed” and moved ahead to skip a section of the race.  Because of that we could never keep up with the points so we knew we couldn’t win.  That doesn’t make it not fun however!  We moved ahead and did a short portion of the next segment

Segment 4:  Night Orienteering
We had a choice of doing a night orienteering course either on foot or on bike.  It appears that one of Stephen’s trekking shoes had come off the pack in the night so we decided to stay/remain on bikes and do the orienteering course as quick as possible because we wanted to get to the paddle transition area by 0430 in the morning for a first light start on the lake.  I took over navigation duties and we busted thru the check point and then headed off to the mandatory point that would have us exit this section.

Segment 5:  Bike Segment to the Transition to Paddle.
This is so typical of adventure racing.  There is always one LONG LONG bike section either on the road or on forest trails that just goes on forever.  It was now almost 3 in the morning and we had a couple hours in front of us to get to the lake put in area.  It was also a bit cold and I changed into a jacket to deflect the wind.  We moved off and actually formed a mini pace line on the road.  We slogged on and began to enter what I call the zombie zone.  This happens normally in the middle of the night on sections that don’t require a lot of mental focus and where we don’t really have to worry about navigation.  The night becomes silent as no one is talking.  Completely absorbed in our own thoughts.  “how am I feeling?”  “we’ve been racing now for 18 hours”.  What is next?
Those kind of thoughts……
Team Carpe Vitam/Commie Bar logged into Transition area 3 at 0445 in the morning.

Segment 6 – The Paddle Section
We had not seen our gear boxes since the beginning of the race and at this transition both the gear boxes and paddle bags were here.  I had been a bit worried about getting on the lake this early in the morning and how cold it would be.  I had packed paddle pants and shoes and a jacket in the pack.  I’m glad I did.  I reached  into the gear bin and pulled out a peanut butter and jelly sandwich and downed an Ensure shake.  Up to this point I had been eating basically nothing but Hammer gel and Perpetuem along with some beef jerkey and Cliff shots.  The peanut butter crackers and snickers tasted good!
Chris (the solo racer) was still with us and Stephen and Ross loaded up one kayak and Chris and I the other.  We started just as the sun was coming up and it was beautiful.  I love getting on the water this early in the morning.  The water was like a mirror.
We moved off and quickly nailed the point on a small island then we hit the opposite shore for another point.  We were watching our time now also because the official race end time had been adjusted to 1020.  We HAD to hit that.  We made a pact that we would come off the lake no later than 0800 to climb up over the mountain and get to the finish.
So we nailed 2 more points then headed for the take out point.

Segment 7:  Trekking
At the paddle take out point, we completely stripped the packs of any gear we would not need.  Go light because we had to climb the mountain up to the Appalachian Trail.  This would be a monster climb.
I paired down my pack to basically nothing and we started off.  We humped through a small town and I actually had thoughts of stopping in a restaurant and having a beer.  Food dreams also begin about this time.!
I took over navigation again and we began the climb up the mountain.  It wasn’t as bad as I thought it would be but still bad enough after racing for 22 hours.  My thigh was still bothering me greatly and the climb didn’t make it feel good at all.  We got up to the ridgeline and logged a mandatory check point then started the elevation loss trek down to Transition area 5.  We got another point on a power line crossing and then limped into the bike transition at 0955.  25 minutes to go and basically a short 2 mile bomb down the ski trails at the ski resort to the finish line.
We knew we had ample time to make this but still hurried and got on our bike shoes and helmets.  A flat tire now could mean disaster.
In the end all went well.  We bombed the ski trails and finished at just about 1015 after 24hours and 15 minutes of racing.

Although we had plans of winning, we were just happy to have finished like always.

Here’s some other details on pack lists and so forth and the photos and videos are below.

My final set up looked like this.  Also over the course of the race I drank approximatley 18 litres (almost 5 gallons) of water! 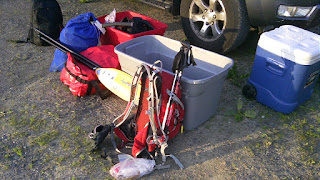 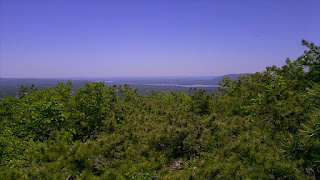 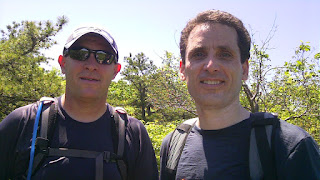 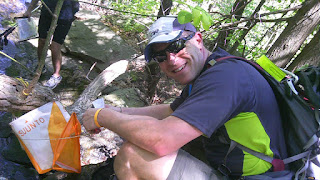 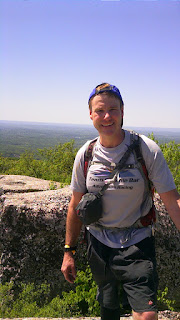 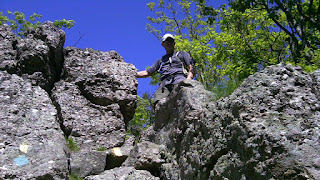 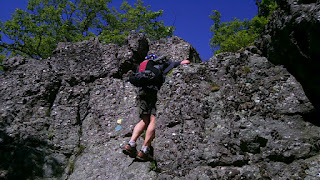 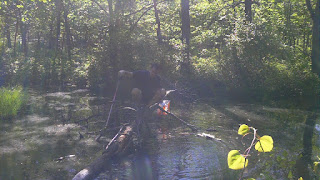 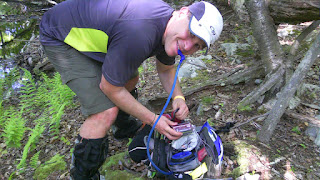 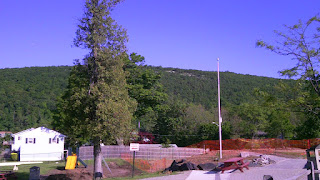 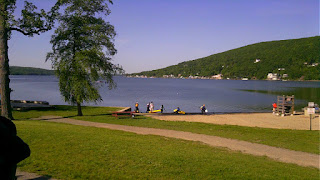 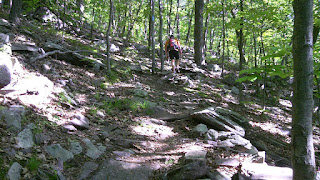 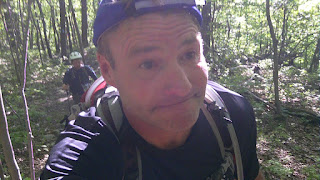 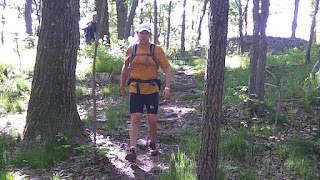 Commies thru Cambridge.... run for cover...

Untitled by eurocope at Garmin Connect - Details
Posted by TCOPES World at 07:30 No comments: