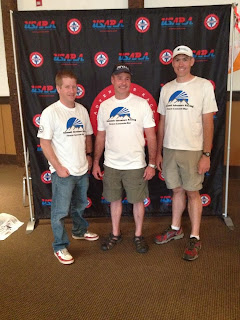 Coming into this years National Championships, I must admit I was a bit anxious.  Less than two weeks prior to the race I had been having I.T. band issues to the point I had to have crutches.  Thank goodness I was able to get past that and by race day I was feeling pretty good albeit I had not trained in a couple of weeks.

Here's how the race unfolded.
I got into town on Thursday night and met up with the guys at the Abe Martin Lodge in Nashville Indiana.  A look at the google satelite images showed some awesome wilderness in the area and we were psyched to not have to deal with 5000 foot mountains like in the east!  We checked in to Race HQ and hung out getting gear ready and our bikes outfitted.  At 7pm there was the briefing and it lasted WAY too long and we got out of there at around 2030 hours.  I was starving so we went into town and I had a couple of beers and a plate of lasagna.  I then went back to the cabin and got the rest of the gear together and hit the sack around 2330.....

Race morning was hectic....  Up early for final gear distribution and then to race HQ to get the maps and course books.  We only had 2 hours to get our strategy and maps ready from 0600- till race start at 0800.
We also had to plot the points ourselves so we got the UTM protractors out and dusted off our plotting skills and got to work.  By 0730 we knew we should quit plotting and get outside ready for the start.
Right at 0800 the gun went off and the National Championships was underway....  Take a deep breath knowing that for the next 30 hours I'll be going strong.  Can I do it?  Always nervous....

Race Start and The Prologue -
The race started with a 2 mile or so run on some of the trails in the park.  This was done to separate the field from the mass bike start to come.  What can I say.  Jogged the course at probably a 10 minute mile pace and got back to the bikes and saddled up.  The bike transition was fine and we knew the next biking segment would be a long one..... 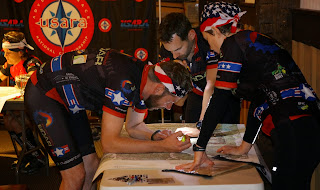 The Mountain Bike -
The MTB started off on a marked course for the first 15 miles.  It was amazing single track riding dipping up and down and swinging through the hard forest area of Brown's County IN.  It was cool to not have to worry about navigating until we got to CP 1 and I think we all enjoyed the ride on absolutely amazing single track.  As good as anywhere.  Chris had started us off a bit faster than what I wanted but without the need to navigate I just held on to the pace and cruised with him and Bait.  After CP1 it got serious.  We knew the next segment would be close to 35 miles.  The navigation wasn't particularly tricky but on bike you really need to pay attention.  We nailed CPs 2-5 and had a long road section into the Transition area and CP 6.  It was probably about 1500 when we got into the transition area and we got ready for the so-called "paddle" section.  We had stopped at a small store for ice cream and potato chips and cokes which always brings a smile. 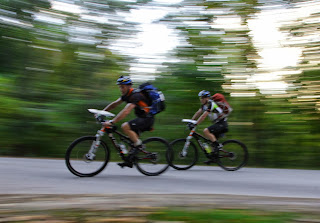 Canoe Portage Section
The answer to the previous question was there was barely any water.  We slid the canoe down a steep embankment to a very small creek bed with maybe a 6 inches of water or so.  We looked at the map and determined we had probably close to 4 miles of pushing, tugging, carrying, lifting, sliding the canoe along this stream bed before we would hit the lake.  Slog, here we come..........
At times we were dragging the canoe across dry land (and over bridges) and other times the water would get to our waists and we'd hop in and paddle for 20 yards before having to get out again and push.  The worst part was getting all the silt and sand in our clothes and shoes.

Finally after CP 7 under a railroad trestle the stream began to open up.  After 4+ miles of portage we began a slow steady paddle past what we called the "redneck yacht clubs"  These were basically pontoon boats at docks along this small river!  Out into the main portion of the lake we made our first big navigation error.  We overshot completely CP 8.  When we finally pulled into this small access pond we were looking for CP 8 but soon realized we were actually in close to CP 9.  Oh well......  no time to go backwards. 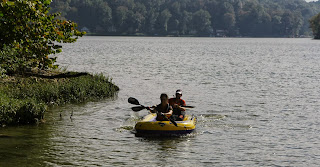 We paddled through a culvert tunnel leaning back in the canoes to pass through and beached the canoe close to a large RR trestle.  From there we humped up the mountain to get CP 9.  By this time it was getting dark.  The sun was beautiful setting over the lake and when we got back to the canoes it was pitch dark.  Going back through the culvert tunnel with our head lamps on staring at the ceiling of the tunnel we saw literally thousands of spiders and I was quietly hoping none would drop on me!.
On the lake in the dark requires shooting precise compass azimuths and we followed a straight line into the transition area in crossing the lake in the dark. 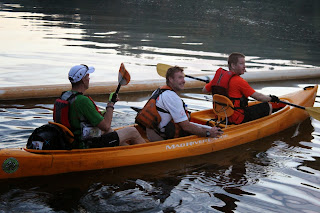 Transition Area 2
After beaching the canoe, we had new race instructions that offered the chance to get two additional CPs but also required paddling the canoe back across the lake while towing a raft to the canoe drop off point.  We could split the team for this so we decided on sending Bait back across the lake and Chris and I would pound out the points.  We rigged up a tow rope for Bait and he headed out.  Soon he would drop the canoe and paddle back in the raft.  Chris and I headed out on the orienteering course.  We estimated it would be about 5k/3 miles or so.... 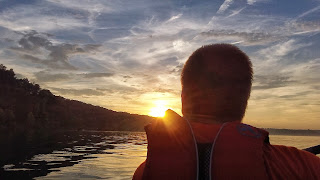 We got both points and the only thing bothering me was the amount of sand in my shoes and shorts which was causing pretty severe blistering and chafing.  Once back we linked up with Bait and Chris and I took some time to take care of ourselves by jumping in the lake naked and beating the sand and silt out of our socks......  Remember when I said bad decision above?  Here's where I could really have used a spare pair of socks and a new shirt.  Thankfully Bait gave me some socks or I would not have been able to complete the next LONG, LONG trekking section.....  We headed out of TA2 a little after midnight. 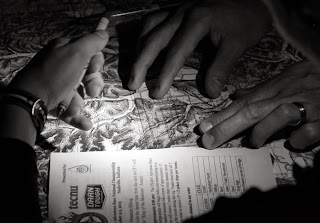 Trekking Section -
We had made a strategic decision in the TA to try and get all the trekking points and subsequently not go to TA3 by bike for the additional orienteering segments.  We passed on trying to get CP 12 and moved instead to the area where we could get 13-16 before heading back to the bikes.  The night was clear and we passed a house where there was a party in progress.  They invited us to join them in beer pong but obviously we declined.  We did each accept a very, very cold Bud Light which went down very refreshingly as we humped the road to the trail head.  On the trail there was a team ahead of us we kept playing leap frog with.  One of their team members was very sick and puking the whole time.  We were successful in nailing the points along the way.  About 4 in the morning or so I heard a massive whooshing noice coming thru the trees!!!  I thought it was perhaps a tornado coming thru but instead it was a monsoon style rain beating down the trees and leaves and soon dumping on us.  We changed into rain gear and it actually got a bit cold.  Fortunately it didn't last long and it only rained for a couple of hours. 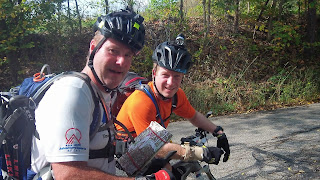 The late hours of the night are always when I get the most sleepy.  As we were waiting for dawn to arrive both Bait and I were falling asleep while walking.  Bait was the funniest as he kept pitching forward and would hastily catch himself before falling.....

We ended up in a reentry streambed looking for CP 17 and I found a discarded lost tube of Glide.  I didn't care where it came from and I quickly began applying it all over my chafed areas.  We found the CP and then moved back to the road for the long haul back to the bikes.  By this time my legs and crotch were raw and bleeding and each step chafed me worse.  I was walking with my legs spread apart as much as I could.  I won't even say what Chris was doing to help alleviate the pain. 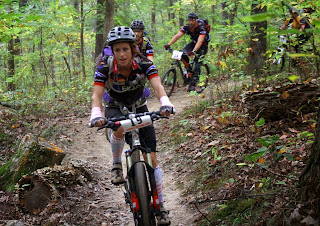 We arrived at the transition at around 0900.  By making the decision to not go to TA3 and spend more time on the trekking section we were almost the last bikes laying around in the lot.  We got saddled up quickly and I plotted a route that would take us past CP 18 back into Nashville.  We had a decent climb on the road but then the road rolled pretty nicely back.  We nailed CP 18 and then back to the single track for CP 19.  We had some difficulty with CP 20 but ultimately got it.  Each time on and off the bike I grimaced with pain because of the chafing on the bike saddle.

Finish and Optional Points
After CP 20 we rolled back into the finish area.  It was about 1215 or so and Dan/Bait and Chris were intent on heading back out to use the remainder of the time to try and get another point.  I was adamently opposed but the majority said to go.  I was very scared about missing the time cut off and I was also in a ton of pain from the chafing.  Walking, or even worse running, another 3 miles was not appealing to me.
I became a follower at this point and basically a straggler to the team.  I knew in the back of my head that time-wise we should be okay (barring an injury or something worse) but I really was not mentally prepared to continue after coming within 5 feet of the finish line.  We moved out and up a large climb about 2k from the finish and rather quickly nailed the optional point and started back.  I was mad and it was a bit of a drag to finish this way when the team had performed so well throughout the past 28 hours.  That said we crossed the finish line with 29 minutes to spare.  I signed and validated the points and it was over..... 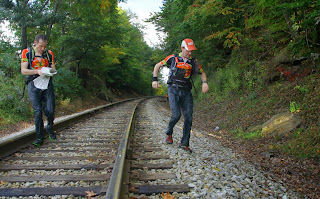 Immediately afterwards we started drinking beer at the car as we loaded gear.  Unofficially the word came down that we were either 2nd or 3rd.  I watched as Team Skye came in with only 9 minutes to go.  That solidified their 2nd place and I was praying that the 3rd slot still held.

Team Commie Bar is the 3rd fastest three man team in America.  Only two teams can navigate and cover more ground further and faster than us.  It's a good feeling....  And a lot of hard work....
Below is the video I put together about the race....